Joel Reichenberger with the Steamboat Pilot and Today pulled together an incredible story of the lost ski areas around our county. Many of us are familiar with Stagecoach, but I had no idea about some of the others. If you're a ski history buff, you will enjoy this read and especially if you have traversed these nearby mountains around Steamboat Springs.

"Steamboat Springs — It was a heady and anxious time, February of 1948.

The city of Steamboat Springs was, at that point, a ranching- and mining-focused community with a snow sports habit.

The people who are legends in the region today were living, breathing parts of it then.

Buddy Werner was a skiing schoolboy, fast, but not considered the “most graceful” of his elementary school peers. Carl Howelsen, acknowledged then and now as the father of skiing in the area, was gone, moved back to his native Norway, but Steamboat was still in his heart, and when he wrote a letter back to the residents in his one-time home, it was literally front page news.

More than anything, however, the city was focused on the new ski lift that started at the base of Howelsen Hill and promised to open up the upper slopes of Emerald Mountain. On Feb. 1, 1948, more than 1,000 people gathered at the base of that lift, for a formal dedication ceremony.

Skiing already was engrained in Steamboat’s soul at that point, of course. A rope tow and boat tow were running skiers up Howelsen, and the purchase of a snowcat by several local men promised access to Storm Mountain and “some of the greatest open skiing territory in America.”

Thanks for doing all of that research and for the local skiers and historians who contributed! 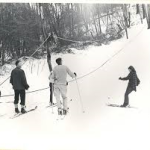