So, you didn't get to run alongside the cyclists on Alpe d'Huez or cheer them while they lapped the Champs-Élysées....well you have your chance next week as the USA Pro Challenge bike race makes its way across Colorado. Steamboat Springs, CO is the start of the race and on Monday you have a chance to see the world-class cyclists zoom through downtown twice with a circuit race of 97 miles, as they meander through Routt County. On Tuesday, they will depart from Steamboat Springs and head towards Arapahoe Basin along 40, through Ute Pass and onto A-Basin for their 115 mile ride. Camp out the night before on Rabbit Ears Pass or sneak up early on Tuesday to see the riders head up the pass.

Already, we are seeing the teams riding around town and acclimating as they gear up for the week-long race. Get your cowbells ready and head to Steamboat for an awesome weekend of festivities and cycling. 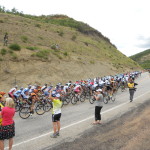