Top 52 Places to Visit in the WORLD!

The New York Times just released a list of 52 places to see around the world. Our little ole corner of the world is 19th on the list!

Celebrating a century of skiing.

This winter marks the 100th anniversary of Colorado’s oldest continually operating ski area. In late 1914, a Norwegian bricklayer named Carl Howelsen cleared trees and brush from a steep hillside overlooking Steamboat Springs to build what would eventually become Howelsen Hill Ski Area. These days, with its one double chair, three surface lifts and 440 vertical feet of skiing, Howelsen Hill is overshadowed by the ranching and mining town’s bigger resort, Steamboat, which has 16 lifts, a 3,668-vertical-foot drop and recently expanded night skiing and new summer biking trails. But don’t let size matter: Howelsen has produced at least 88 Olympians over the years. Head to Steamboat Springs in February for the Winter Carnival to celebrate a century of skiing in the West with jumping exhibitions, tubing parties and parades. TIM NEVILLE 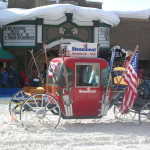